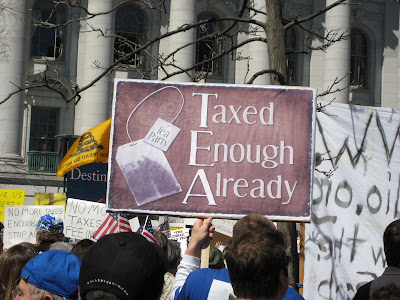 A disparate band of 5000 patriots, homeschoolers, rubes, gay federalists, anti-tax activists, blue-collar hangers-on, unemployeds, anti-Feds, country club Republicans, Republicans-by-default, black Baptist Democrats, self-employeds, formerly self-employeds and soon-to-be self-employeds, mothers-with-children, fathers-with-children, and conservative politicos gathered on the state capitol grounds to...well. I'm not completely sure. There were at least fifty agendas present (There would be at a liberal gathering as well, of course. We are a varied and interesting people; a still free people). My overwhelming sense was that as a group this was an anti-big-government gathering, but we wouldn't agree on too much more. 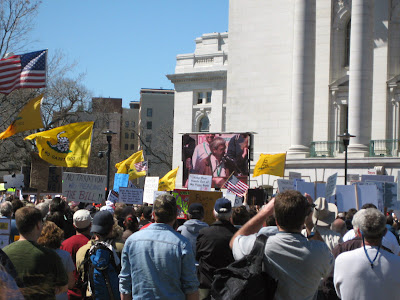 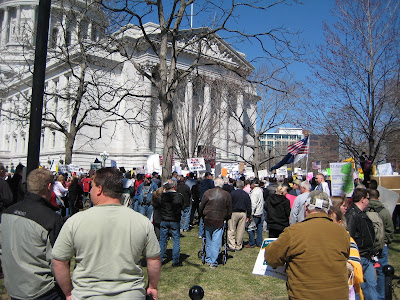 We were a very polite and civil gathering. An announcement thanking the Capitol Police for their cooperation was greeted with applause and shouts of thanks. The biggest roar was early on, for Paul Ryan. He should have spoken last. The most appreciative applause was for a 17 year old homeschooled gal who wowed the crowd with her passion and spunk, reminding us of the first Boston Tea Party and connecting us to that. It was a beautiful day. I think most of the folks came from outside of Dane County. 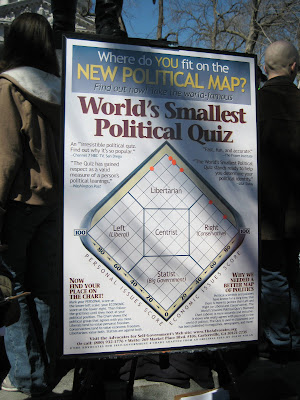 I took the Libertarian Quiz (chart shown above) and scored a 170 out of 200. To the Libertarians administering the quiz, they thought that meant I was one of them. But hey, can a libertarian ever be part of a larger group? And doesn't siding/voting with them amount to a wasted vote? I'm mulling it over. Plus, the quiz was a bit rigged, so I'm not sure what it all means.

As I was walking away, I passed a brand, spanking new van. In the driver's seat was a smarmy, well-fed liberal. He was saying "Deal with it! You lost!" I replied, indicating the dispersing crowd, "This IS dealing with it, isn't it?" It occurred to me to ask him, should our current trend toward almost infinite deficit spending continue, if he thought he could expect his children and grandchildren to be able to drive a nice expensive new minivan, or dress as well as he was dressed, or eat as well as he clearly was eating. But I let it go. 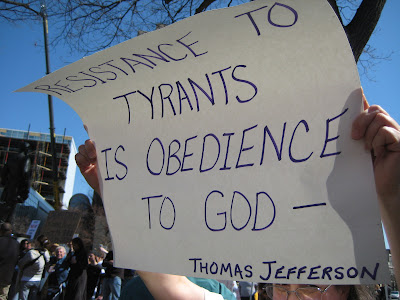 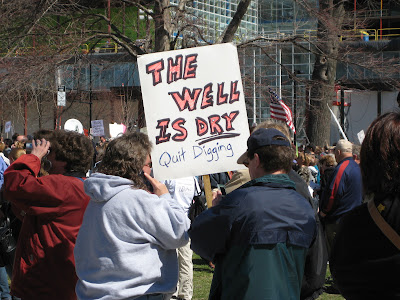 UPDATE: I received this email from a woman friend "of about my generation", a Lutheran in Mississippi (You didn't think there were Lutherans in Mississippi, right?). Quoted with permission:

First demonstration since 'invading' the college president's office in 1969 (and boy was I scared then--of course, he'd invited us in, and listened to us; even posed for photos--what can I say? it was a Methodist church college--not Berkeley, and we were protesting new restrictions on male visitors into female dorms, not Vietnam or Imperial America--as if I ever had a male visitor...ahem...but that's another story--I digress...ahem...)
Maybe 1000 people in little old Tupelo today, at the City Hall square. The most exciting part, really, was turning onto Main Street and joining so many other cars going to the same place!
Satisfying, to an extent, but probably not so effective as we dream. Still, I and many of my Lutheran friends were there, so...
Probably the cleanest, neatest, politest protest ever! (and whitest...)
Susan

Can you only imagine the reaction four years ago, if the standard Republican answer to anti-war protests was "you lost, deal with it!" ???!?

I'm really amazed at the double standard being applied re: public demonstration. I suppose this has just gotten so much alternative press coverage they couldn't just suppress it like they usually do for March for Life and other major conservative demonstrations.

The DHS will be watching you all.

In this highly partisan society we live in, "double standards" are what we specialize in. This may appear to be one-sided, but the left has its own perspectives which leads it to conclude that they have been unfairly treated. By Bush, of course. That ole scapebillygoat will be around for at least a decade.

Steve: you posted a comment here? One this white supremacist, racist blog??? I'd sit with my back to the wall, pal. They'll be coming for you too.