Those of you with a great memory and no social life may remember a little story I wrote here back in August of last year about the Declan Johnson benefit fund raiser.

In that story I mentioned a guy named Joe Moll, who became embroiled in a ferocious bidding war for a rocking chair I had donated to the live auction. After finally getting the winning bid, he then turned around and graciously gave the rocker to the woman bidding against him. I thought of it as a metaphor for the spirit of the whole day: a community of people pulling together to raise money for a needy family.

No good deed goes unpunished. At least, that was my thought when I heard what came next. For not many weeks after that Joe's dear wife Peg was diagnosed with brain tumors. It was soon enough determined that they were inoperable. And Peg and Joe settled down faithfully to await what the Lord had in mind for them.

In the bulletin in church today we received greetings from Joe, who has been at home attending to Peg's needs. It seems that we are nearing the end of Peg's life: she hasn't been able to take solid food and has trouble with liquids. Here is what Joe's greeting said:

Never has Holy Week and the promise of Easter met as much to Peggy and me as it did this year. We know that because Jesus rose from the dead, we also will be resurrected on the day of God's choosng. All of you have made Peggy and me feel so loved--prayers, cards by the handful, phone calls, gifts, words of encouragement, and of course, Pastor Mack's weekly visits.

I know that God has heard all of your prayers and He will answer them according to His will and in our best interest. A few months ago when Peggy could speak, she said, 'I think God is saving me from some future trouble.' Even then Peggy trusted that God wanted the best for her no matter what happened.

Thank you all for your love. Please keep Peggy in your prayers as we wait for God to fulfill His will in our lives.

Your brother in faith;

Amen. And what a faithful and profound understanding of what to the world appears to be tragedy and sorrow.
Posted by Bruce Gee at 11:01 AM No comments:

Ok, done with this basketball business

As the old song goes,

One of my Winter survival techniques is to watch college basketball, and since I randomly live near Madison Wisconsin I randomly follow and cheer for the Badgers.
And oh what a year it has been. Big Ten champs, B10 tourney champs, and getting as far as the Sweet Sixteen in the Big Dance. So a little Presbyterian school with 1750 students beat the living hope out of my boys? So what, they had a wonderful year.
But now that they're done, the bloom is off the rose as far as my caring a lot about college basketball anymore.

Some fan I've turned out to be. But you know, is basketball for the fan or the fan for basketball, is what I want to know. I figure it is there to serve me.

Bring on baseball and the Brewers, for whom I will randomly cheer!
Posted by Bruce Gee at 8:32 PM No comments:

The Cardinal Is Back

My readers with great memories and no visible social life will remember my posting about the fat red Cardinal who had visited upon us a kind of Bird Siege back in December. The little bundle of joy is back.

What's with bashing its head against our bathroom window every morning, anyway?

After an almost three-month hiatus, our male cardinal has returned to the bush from which he launches himself against the window. He's brought his wife this time, who thinks the whole affair is really silly: " I'm impressed already. Your nice red feathers, your je ne sais quoi panache! You don't have to do this, honey. Let's go make a nest and....well, YOU know"...

But no. Each morning at dawn the Siege begins again. If anything with his lady friend present it is more frenzied. She sits on a lower branch and just wonders what part of the Rituals of Spring this represents.

Well, anyway, I'm fighting back this time. The large graphic of the lion with jaws agape had no effect. I'm thinking a large picture of ME ought to do the trick though.
Whatchew think? 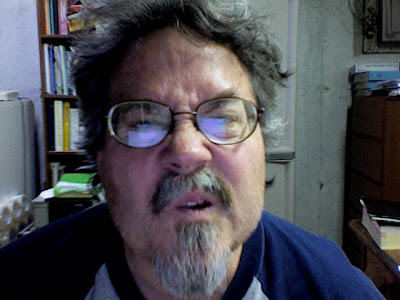 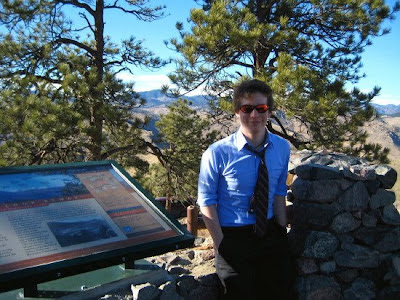 Jeremy in the Colorado foothills
I think I checked out for a few weeks. At least, it has been awhile since I've thought about this blog. My fans, clearly, are begging for something--anything--to be written: just a crumb from my table to end the loneliness and angst of blogger silence.

There. That oughta do it.


So, what's been up? Here's what's been up. I drove down to Indianapolis a bit over a week ago to watch the Big Ten Tournament. It was a lot of fun, I mean a lot of fun, except for the flu bug I got. So it was sleep all the time exept when I dragged myself down to the Conseco Center to watch the next game. The most fun of all, notwithstanding being tired and a bit wobbly, was having great conversations with total strangers--whoever sat down next to me in the stands. The fanbases of the eleven teams represented were completely mixed, so you had to mingle with the enemy. I loved it. There was of course the de rigeur small world episode that always happens to me. This time it was some Lutherans sitting behind me who had just called a pastor friend of mine--Aaron Koch to be exact. So we talked about Aaron--a very accomplished preacher and Kantor.
The other really fun thing was the great seat I scored for the Sunday final: twenty feet from the corner of the court--after having spent the earlier two days of the tournament in the hole-in-the-ozone-layer of the fieldhouse--and a good ten feet from Tom Oates the WSJ sports writer. The sports writers on Sunday looked blase, frowsy and hung over. 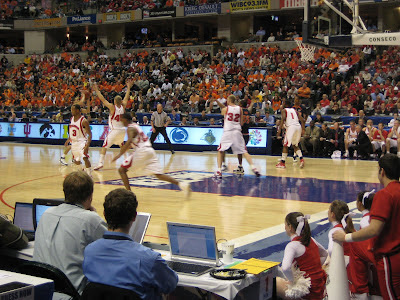 What else? Ok, the fam. Jeremy and I flew to Denver a few weeks ago for him to interview for a major scholarship at UColorado Denver. The word came back to him a few days ago that he got it! So the boy will probably be shipping out of here sometime in June for Colo. Robin gets her art table back(located in The Boy's bedroom), but we've got to go shopping for an automobile for the young man.

Colin was home for a brief spell three weeks ago, and is back in Korea now till June. He comes home; we head out to Miller Park for some Brewers baseball. When last heard from, he was sleeping in an all-night sauna, having spent his money partying with my sis Elizabeth in NYC on his way back to Seoul. Just grist for the grandpa mill: stories to tell the young 'uns around the winter fire. Sleeping in an all-night sauna.

Otherwise, we're enjoying a classic Wisconsin Winter, complete with a March six-inch snowfall after several promising days of temps in the forties. I remember Winters like this from childhood, when I would sleep with my baseball glove and dream of fields of glory, the crack of the bat, the long outfield run to haul in a left-center fly ball. Only to waken to four inches of new snow and heartbreak.


It is Holy week. It is March Madness weekend. The bills are mostly paid; the grass does not yet need mowing. The puppy is doomed to 4H dog obedience training with Robin soon. The world is once again spinning in greased grooves. 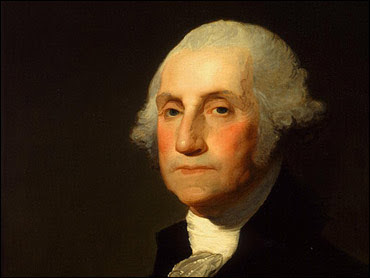 CIVICS, anyone? I haven't had a civics class since seventh grade.
Go ahead:
Take the test!

Here are 60 questions, some of them vewy twicky. On a few you just have to pick the least absurd answer. 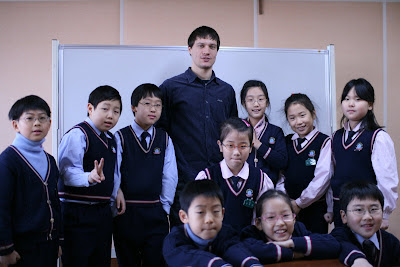 My son Colin's Second Grade Class in Seoul, Korea.
They don't look like trouble to me...

With no record to speak of, it seems worthwhile that the Senator from Illinois, now running for President of the United States, be asked more probing and creative questions than the media heretofore seems to have been willing to ask.

Toward that end, read this article. 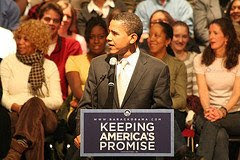 Is it just me, or is the MSM giving this gentleman a pass? The thinking seems to be, "Oh, he's so nice. And since he doesn't have any experience to speak of, it would just be a waste of time to ask him pointless questions about what actions he'd take as president! Plus, he's so NIIICE!"

My favorite question posed in the article:

3. Could you please cite three things you’ve done as senator to help win the war in Iraq?

********
Update: Ah. The MSM has awoken. A little. I keep tellin' ya: when the bright lights hit Obama, he's not going to be able to hide from his paltry collection of good deeds. And now the media are starting to dig a little; ask a few questions about some of his doin's.