A good post from Paul McCain on the current worldwide controversy regarding child abuse in the Catholic Church. While I appreciate those who have pointed out the hypocrisy on all sides, I think the angle pastor McCain is pointing to is the best. To quote and summarize:

"Here’s the point: It is precisely the wrong response to go on the attack against the media. The only response that should be made is to express total and complete outrage and complete and very public remorse for the sexual abuse of children at the hands of priests. Period. And keep saying it. Over and over, ad naseum. Back the words up with actions and provide the proof of action. An absolute zero tolerance policy on these behaviors must be adopted everywhere and applied every time."

That doesn't mean I'll take down my earlier post on the controversy. I still think my friends will benefit from reading the post by John Stephenson. Even if what he has done is exactly that: "...go on the attack against the media...". Ah, well.
Nevertheless, read this.
Posted by Bruce Gee at 8:03 PM No comments:

The psychology of uncertainty really does matter. As long as those in industry and commerce hear that the government is the solution to the problems that they supposedly created, browbeaten individuals will not take risks and begin hiring. All the populist rhetoric, all the sympathetic statistical gymnastics from the liberal pundits, all the euphemisms of “jobs saved,” still won’t change the fact that American business believes Mr. Obama wants to take more of their money to redistribute rather than empowering them to hire and make a profit.

-Victor Davis Hanson
The dialogue between my wife and me, during this past quarter when my gross earnings as a self-employed individual were the lowest they've been in 30 years, has centered around the profound uncertainty injected into not just the business community but the consuming public, as a result of the extensive indecision on healthcare (and its playout, which I think is obviously disastrous), and just about all of the rest of the current admin's agenda. You may like the agenda, but it has played havoc with earning a living. The psychology of uncertainty has to be the prime theme of Obama's first year and a half.
Posted by Bruce Gee at 7:08 PM No comments:

I can remember when I was a teenager, at the height of the cold war between my father and me, both of us suddenly one day standing back in awe, as we simultaneously became cognizant of the glue job my mother was doing of keeping flock and fold together. It was a serious revelation for me of her hard work and dedication to the family, and as unhumblable as I was, it served to humble me.
I'm reading THE PLOT AGAINST AMERICA by Philip Roth. Yes, THAT Philip Roth. He's gotten to be a pretty good writer in his old age. Here is an interesting quote that took my by surprise last night. He is describing a late 1930's New Jersey small-town Jewish community, but actually also describing America everywhere at that time:

Yeah. I'll take the men's job.
And this, from a Stephen Vincent Benet poem, describing a mistress of a plantation, as a woman able:

The women in my life--wife and mother and grandmothers all--have shown this multi-talented multitasking skill that men frankly don't regularly notice. Our egos tend to blind us. They hide their talents in plain sight, and shake their heads when we take them for granted. So it has ever been.
One has to wonder which of Solomon's wives he was thinking of when he (ok, purportedly; perhaps) penned these words:

An excellent wife, who can find?
She is far more precious than jewels,
The heart of her husband trusts in her,
and he will have no lack of gain.
She does him good, and not harm,
all the days of her life.
She seeks wool and flax,
and works with willing hands.
She is like the ships of the merchant;
she brings her food from afar.
She rises while it is yet night
and provides food for her household
and portions for her maidens.
She considers a field and buys it;
with the fruit of her hands she plants
a vineyard.
She dresses herself with strength
and makes her arms strong.
She perceives that her merchandise is
profitable.
Her lamp does not go out at night.
She puts her hands to the distaff,
and her hands hold the spindle.
She opens her hands to the poor
and reaches out her hands to the needy.
She is not afraid of snow for her household,
for all her household are clothed in scarlet.
She makes bed coverings for herself;
her clothing is fine linen and purple.
Her husband is known in the gates
when he sits among the elders of the land.
She makes linen garments and sells them;
she delivers sashes to the merchant.
Strength and dignity are her clothing,
and she laughs at the time to come.
She opens her mouth with wisdom,
and the teaching of kindness is on her tongue.
She looks well to the ways of her household
and does not eat the bread of idleness.
Her children rise up and call her blessed;
her husband also, and he praises her;
Many women have done excellently,
but you surpass them all.
Charm is deceitful, and beauty in vain,
but a woman who fears the Lord is to be praised.
Give her of the fruit of her hands,
and let her works praise her in the gates.
Proverbs 31

It Must Be Holy Week!

Throughout Christendom, this is the week of weeks, the celebration of the "fullness of time" when Jesus Christ went to Jerusalem, taught (and, you could say, taunted) in the temple courts, instituted his Holy Supper, and then proceeded to be put to death "for the sins of the whole world" (1 John 2:2), to be raised again on a Sunday morning.
However, something about this week seems to bring out the wackos. This year they are specializing in wacking Pope Benedict, for his alleged crimes vis a vis the priest sex abuse scandals. While not wanting to reduce in any way the severity of these crimes, I have read in the past few days a couple of articles that defend Ratzinger/Benedict from the misinformation afloat out there. They are, in fairness worth a read. At least one may also be eyebrow raising for old, settled, staid Lutherans (I've not been one long enough to be staid, but I'm old and settled).
The first, from Logia magazine is entitled
by John Stephenson of St. Catherine's seminary in Canada. He does a wonderful job of revisiting the career of Ratzinger, and gives us confessional Lutherans this rather nice quote:

“The Lutherans are to Ratzinger what the Orthodox are to John Paul: the separated brethren he knows best, and for whom he has the greatest natural affinity.” John Allen, Cardinal Ratzinger, 231

Stephenson doesn't mince words, but I find his article a balancing act against what you'll find in what he calls the "quality" press.
The second article is a more direct defense of the NYT article cited above. It is written by Cardinal William Levada, Prefect of the Congregation for the Doctrine of the Faith. Again, a balancing read if all you've seen is the Times article and its trickle-downs. He begins:

In our melting pot of peoples, languages and backgrounds, Americans are not noted as examples of “high” culture. But we can take pride as a rule in our passion for fairness. In the Vatican where I currently work, my colleagues – whether fellow cardinals at meetings or officials in my office – come from many different countries, continents and cultures. As I write this response today (March 26, 2010) I have had to admit to them that I am not proud of America’s newspaper of record, the New York Times, as a paragon of fairness.

May your Maundy Thursday be yeastless, and your Easter full of rediscovered joy at the peculiar, surprising story of God-become-man, and his deeds of redemption for us, for us, for all of us. 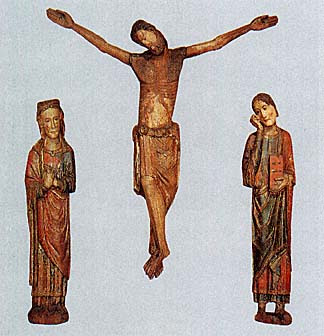