Lewis The Cat Makes His Debut 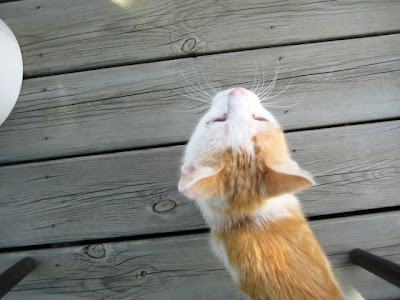 Once upon a May, 2009, on the day of the great Syttende Mai footrace, a scrawny orange and white cat got sucked up into the windy venturi of joggers, and raced a mile or two down the road. Or maybe even further. Or maybe just a few blocks, we don't know. When he finally got kicked out of the maelstrom, he was at our house.

But he was a cute, scrawny cat, long legged and so very different from the slouchy, letting-themselves-go, low-slung black cats who call our house a home. He got fed. He stayed. He got a name.

"Ornge," Colin calls him. But after several days of deep reflection, a family straw poll went with...Lewis. And once you name a cat, soon enough there will be a manila folder at the vet's bearing the cat's name. And so it is with Lewis. 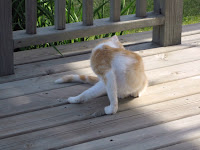 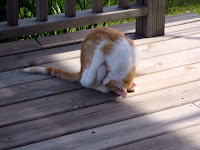 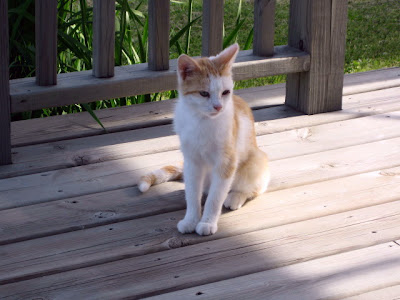 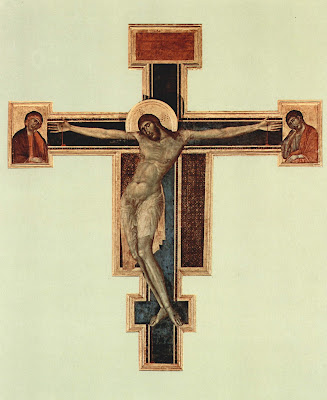 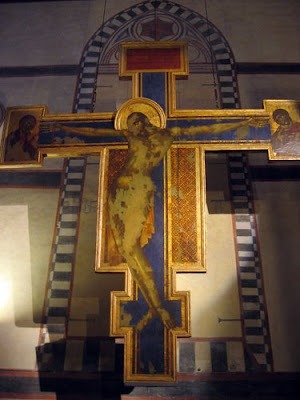 Crocifisso, restored
I just finished reading Robert Clark's DARK WATER, a sort of art-history telling of the 1966 flooding of the Arno River. I had passed through Florence, Italy, in 1972, spending several days glorying in the amazing art of this ancient home of Dante. The David of Michelangelo had by then been cleaned up after the flood, but much much art not to mention hundreds of thousands of ancient books, were still mud-covered and rotting in various storage facilities spread throughout the area, awaiting the funds and restoration resources of Italy and the world. Still in 1972, the terrible flood of 1966 was fresh on the minds of the people there and the people who came to observe the city.

The book is a great read. A taste:

"...But on a morning in Florence in February I woke up and I didn't believe in God anymore; or, rather, I had the belief but not the feeling of believing, which I suppose was to say that I had lost faith. I still had the idea of the divine, but couldn't quite touch it, not to say see it. It had become an abstraction at a very great remove. The loss didn't seem to make any great difference to me except when I thought of it. It was as though I'd been entertaining a great hope for a very long while--say, a windfall, an award, the perfect job--which had been in the end disappointed, but whose reality hadn't quite sunk in.
That I should have felt this was odd, because on the principle just enumerated, I should by rights have been up to my neck in God because I was up to my neck in beauty. Maybe I needed to try a little harder. I should put art to the test and see if it actually did what I thought it was supposed to do. I went back to see the Cimabue Crocifisso. [Cimabue's Crucifixion of Christ, a 13th century milestone in the history of art, had become the symbol of the struggle to return to normalcy for Firenze after the flood.] Cimabue's purposes were strictly spiritual and in that regard even practical. That's not to say the labor did not give him pleasure or despair, or that he wasn't proud of it and pleased to think about what it would do for his reputation. But he'd made an object, a tool to effect Christian worship, prayer, fear, and consolation. As the Arno was a machine made to move water, the Crocifisso was a machine to move sinners to salvation. I had a feeling I would not be so easily converted. But maybe I would have a transcendent moment, or at least a powerful sense of "tactile values." The beauty would turn me back onto the path whose track I'd lost.
I went to Santa Croce first thing in the morning so I could have the Crocifisso to myself, and I was indeed the only person in the refectory. But on the way, I stopped for a moment to look at the cross by Lippo di Benivieni....It was more striking, more compelling, than I'd remembered. Its Christ was an obviously young, even handsome man and perhaps because of that, he projected an innocence that could only produce a concomitant sense, in me at least, of the outrage and cruelty that had been perpetrated on his body. Mary and John, on either end of the horizontal spar, look shattered, their faces wrenched by grief. In the Benevieni there's what Ruskin called the sweetness of Giotto [Cimabue's famous student] in the rendering of Jesus; in the tender-limbed body, the way the toes of the right foot are curled around the left, as though to protect them, this one little thing, from harm. It moves you to pity, and perhaps to the thought that God might pity you.
After seeing the Benevieni, the Cimabue looked different to me. I couldn't now say how many times I'd visited it in the last two years, never mind how many times I'd seen it in photographs. But now it seemed darker, stiller, more silent and cold than I recalled. Viewing it wasn't an entirely pleasant experience. It wasn't consoling or uplifting. What it manifested more than any other quality was the absolute deadness of Jesus. It seemed to enclose and hold fast the minute just after his last breath, his final heartbeat. Mary and John are not so much grieving as stunned; they're still taking things in; the tears haven't yet come. And the resurrection doesn't even register as a possibility. It's as though he's swallowed death whole."

di Benivieni's cross
Far be it from me to judge how people go about the terrible and discouraging task of rediscovering their faith after, apparently, losing it. It is interesting for me, however, that the author turned to iconography rather than the words of scripture as a means to rediscover his spiritual groove. Is religious art "enough"? By his words it is clear Clark has much more than a shallow understanding of the meaning of Jesus' death and resurrection. Whether this is due to early catechesis that stuck, or a lifetime of pondering religous art, he doesn't make clear. He does, however, remind me that religious art based upon strong catechesis can be very powerful. Alone, it isn't enough. The Word, spoken into our ears is, clearly, by the testimony of scripture, needful.
Posted by Bruce Gee at 10:32 PM 2 comments: