CIA and the Justice Dept

The WSJ Saturday ran a long article by a former CIA clandestine operative, Reuel Marc Gerecht, expressing deep concern about the decision by the Obama justice department to go after CIA interrogators. He argues that this arguably unnecessary move--undertaken for political reasons alone--will completely undermine the agency's ability to do its job.

"A good case officer with Middle Eastern languages and a penchant for understanding Islamic radicalism would now have to be insane to accept an assignment that detailed him to interrogate Islamic terrorist suspects. No self-respecting case officer wants to be constantly surveilledby his boss. That's not the way the intelligence business works, which is, when it works, an idiosyncratic, intimate affair. We should be horrified by the idea that holy warriors will now be questioned by operatives who tolerate all the cover-your-trash paperwork, who don't mind being videoed when they go to work, who want to be second-guessed by their CIA bosses, let alone by FBI agents, and intelligence-committee Congressional staffers, and now White House officials."

While Obama has retained the practice of rendition, and while we are likely in a period--unlike the years 2001 to 2003--when interrogation will be less frequent, what Gerecht most deplores is the removal of the tools of the trade for interrogators.

"...With enhanced interrogation off-limits, CIA operatives could easily find themselves face-to-face with a jihadist who tells them to bugger off. What are they then to do? Will their superiors be professionally sensitive to their inability to make further progress? Could they get promoted after they pass suspected jihadists to the FBI? Would the FBI even take them, knowing that they might have to be rendered to an unsavory foreign power and thereby quite possibly compromise the bureau's more pristine image?..."

The CIA "hardly did a superlative job.." in its fight against Islamic militarism. Nevertheless, I have to believe we're back on the clock again, awaiting the next major strike. Thanks to the Obama justice department, America is once again much less safe.
Posted by Bruce Gee at 10:40 AM 5 comments: 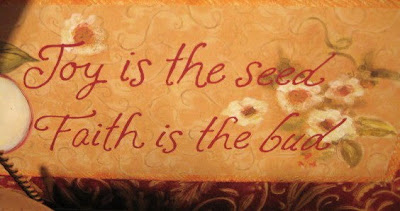 Wafting my way through a local Cracker Barrel store, floating on waves of perfumed candles and other inedibles, my eye caught this little hand painted plaque. It wasn't till I got out to my van and was about to start the engine that it registered, and I found myself wandering back in to take a picture. "My wife may be interested in this," I sorta lied to the lady behind the counter, "But I always take a picture first." Well, it wasn't technically a lie, although if I were to present this to Deb as a gift I'd be greeted by a disbelieving goggle, followed by a chuckle, followed by its being tossed into the recyclables.

It is the theology behind it that intrigued me, motivating me to slog back in to the C Barrel, make my excuse, and snap the picture. Have we finally found the succinct, theological summary of neo-evangelicalism? C'mon, confessional Lutherans, expound!

Or is it just too obvious?


Come to mull on it, this plaque describes the starting point of Roman Catholicism as well, doesn't it?

"Way down deep, we're all motivated by the same urges. Cats have the courage to live by them."
- Jim Davis

"Women and cats will do as they please, and men and dogs should relax and get used to the idea."
- Unknown

A Man and his Bike 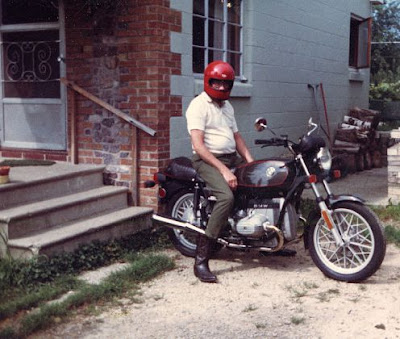 Truthfully, though, you really didn't want him to take you for a ride. The guy had a tendency to show off. Plus, he'd had a few accidents. His first BMW pretty much died one Father's Day, when my wife and I went riding with him--Deb and I riding my old Yamaha 500 with its dented gas tank. We'd pretty much safely made it up into the Baraboo hills, when Dad suddenly went swooshing past us, up over a hill and soaring down into a valley, on one of the Hills' famous little windy roads. Two things happened at the bottom of the hill: the road veered right. And it turned to gravel. Sort of hard to see from the top of the hill, or while going 60 on a motorcycle.
Dad didn't quite make the veer, and disappeared in a cloud of dust into a rapidly narrowing gully. By the time we caught up to him, he was standing next to a smoking motorcycle. Bloodied but unbowed.
End of ride.

He had a new bike three days later. Some guys just never learn.
Posted by Bruce Gee at 6:31 PM 4 comments: 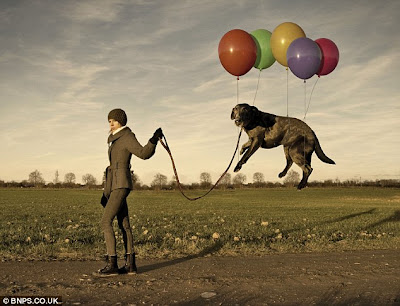 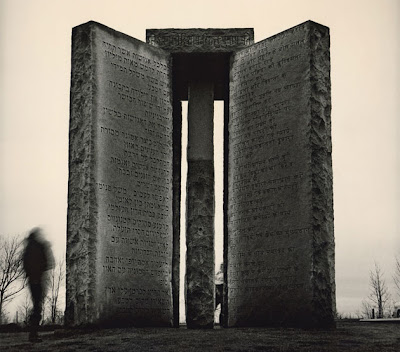 Wired Magazine has a fascinating retelling of the quarter-century existence of the Georgia Guidestones, a post-apocalyptic kiosk for enlightened survivors.

The strangest monument in America looms over a barren knoll in northeastern Georgia. Five massive slabs of polished granite rise out of the earth in a star pattern. The rocks are each 16 feet tall, with four of them weighing more than 20 tons apiece. Together they support a 25,000-pound capstone. Approaching the edifice, it's hard not to think immediately of England's Stonehenge or possibly the ominous monolith from 2001: A Space Odyssey. Built in 1980, these pale gray rocks are quietly awaiting the end of the world as we know it.

Definitely worth the read.
Posted by Bruce Gee at 11:21 PM 1 comment:

The Secretary of the UN, Korean Ban Ki-Moon, has this to say about the future of the world:

"We have just four months. Four months to secure the future of our planet."

This is in reference to a UN environmental conference in Copenhagen in December.
However, it smacks of the sorts of dire predictions--based in my opinion upon about the same quality of data--that religious fundies often spout.

Check out this website for a list of recent end-of-world predictions. Do we have two disparate types of fanatics now, each predicting similar things? And gosh. Is one of them the head of the United Nations? 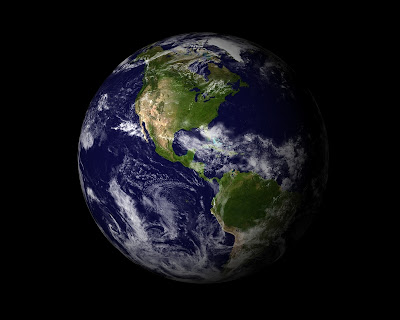 The Wisconsin State Journal ran an article on its opinion page, back on August 5, about church softball leagues. I thought, "Hm. Ok, good move!" Then I read further. The writer, presumably a Christian, had a nasty collision with another member of his team, both scrambling for a popped up ball. He stopped me cold with this little zinger, though:

"Some might point out, correctly, that the softball gods were merely punishing me for committing the cardinal sin of failing to call off the shortstop..."

Grrrrr. I have no sense of humor about this sort of little gaffe.
Posted by Bruce Gee at 4:31 PM 1 comment:

The Wall Street Journal had an article this week entitled

A NEW THERAPY ON FAITH AND SEXUAL IDENTITY .

For years there has been a serious wall erected by the American Psychological Association and other groups, insisting (based upon what many consider questionable science, or soft science, or just plain anecdotal evidence) that sexual orientation is fixed and unalterable. The direction this position tended to take was to tell people who are struggling with being homosexual that there was and should be no way to change, and that gays should embrace their identity.

This provoked a lot of conflict within some people vis a vis their faith. If the shrinks were right, did this mean their faith teachings were wrong? For many, this was the conclusion they came to, and then went about reshaping their doctrinal positions to accomodate the teachings of the psychologists and psychiatrists and gay activists. For others, the conflict just kept getting deeper, with many men and women unable to reconcile their sexual feelings with their beliefs.

To the credit of the association, there are new APA guidelines that have amended the longstanding practices of counselors somewhat. It came about as a result of a task force, initially formed to respond to the increasing numbers of "change therapists" out there--presumably mostly Christian--who were claiming that arousal patterns could be changed. The article goes on:

"But the task force also gained an appreciaiton for the pain some men and women feel in trying to reconcile their sexual attractions with their faith...The task force acknowledged that for those from conservative faiths, affirming a gay identity could feel very much like renouncing their religious identity..."

The new guidelines aren't without many glass walls.

"...The therapist must make clear that homosexuality doesn't signal a mental or emotional disorder. The counselor must advise clients that gay men and women can lead happy and healthy lives, and emphasize that there is no evidence therapy can change sexual orientation.
"But if the client still believes that affirming his same-sex attractions would be sinful or destructive to his faith, psychologists can help him construct an identity that rejects the power of those attractions, the APA says. That might require living celibately, learning to deflect sexual impulses or framing a life of struggle as an opportunity to grow closer to God."

Well. Progress. Gay rights activists aren't necessarily thrilled about the new guidelines. Some call them incredibly misguided, likely to cause great suffering. They make statements like, "People have their lives destroyed." I personally think too many experts are telling too many people they are having their lives destroyed, usually because these poor sops aren't lining up behind the experts' agendas. These people also don't understand the import of faith, and how faith shapes lives.
Posted by Bruce Gee at 4:00 PM 3 comments: 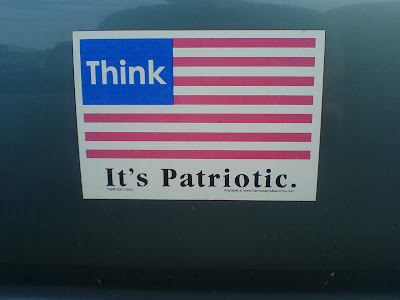