"CLOTTED CALM": Franzmann and Conflict in the Church

The No Inklings Book Club has undertaken to read together Martin Franzmann's fine book FOLLOW ME, a devotion on the book of Matthew. I used this book a decade ago in leading a Bible study at a previous church, and found it poetic and inspiring. A taste:

"Conflict is never pretty and always entails agony; and there are those who hold that in the church all conflict should be avoided at all costs and tranquility should be purchased at any price, and they deem such clotted calm the very peace of God. But the evangelists' account of the contradicted Christ tells us plainly that the church cannot avoid conflict if she be the church of Christ. It tells us that men must take the agony of conflict and bear the brunt of controversy if they are the Christ's. We cluck our disapproval of the bitter controversies of the past and rejoice that such things can no longer happen here. Perhaps our reluctance to face conflict is one of the reasons why we see so puny a Christ and think our God and His kingdom so small."

By "contradicted Christ" Franzmann is referring to a theme he has developed regarding Jesus' powerful responses to men's doubt, rejection, and blasphemy in Chapter 11: his response to the prisoner John the Baptist's questions about him.
This is by no means an easy read. In fact, I find I have to read it in gulps, because it is so densely populated with insights and language that just make me stop and pause. One of my favorite quotes is Franzmann trying to quote Luther, in a way many of us have found ourselves doing:

"'When God begins a thing,' Luther says somewhere, 'it always looks as if nothing will come of it.' He chooses out the least of all nations to be His peculiar people. He makes His Messiah a Servant who goes down in defeat and death. And His kingdom comes as an unspectacular 'stone cut by no human hand,' no match for the bright and splendid and mighty magnitude of the powers of this world. And so His revelation always strikes sparks of contradiction when it comes to man...'"

"Luther says somewhere..." How many times have I heard THAT? I love that Franzmann put it in his book, as if the point he had to make was too intense to stop and actually look up and cite the Luther quote. Not everyone can get away with that. Or, I picture him having looked fruitlessly for the quote, queried his peers about it, been unsuccessful at actually locating it in Luther's works, but still unwilling to give it up. It is such a good quote, and so true.
Posted by Bruce Gee at 8:59 PM No comments: 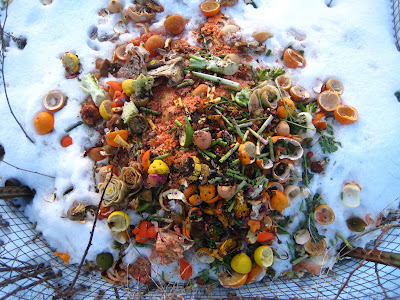 As we bobbed out in the ocean, very near us pelicans by the dozens were busy attacking the fish feeding just off the beach. This gives you an idea of the dive bombing these crazy birds were into. As soon as one had a fish in its copious beak, a seagull would land on its back and try to steal the fish. I could get within a few feet of these birds as they dove--sometimes from 30 feet in the air--crash landed, speared a fish, gobbled it down while being harassed by seagulls, and then without fail they would wiggle their tail feathers in tingling delight. Or maybe the live fish in the belly just tickled, I'm not sure.

One afternoon, we could look up and down a two mile beach and see this frenetic activity happening along its full length. It reminded me of WWII air battle scenes, wild dogfights in the sky, flying objects diving and swooping. And then wiggling their tails in delight.
Posted by Bruce Gee at 9:17 PM No comments: 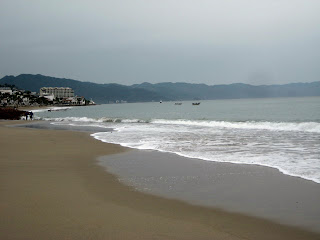 The beach at Lo de Marcos is perhaps two miles long, with a user friendly shark net 200 yds out. This is brown sand, not the white glorious stuff of the playas in the Yucatan. Still, very nice, and with partly cloudy skies and 75 degree weather, it was particularly suited for our northern skins. In the Yuc, we burned. 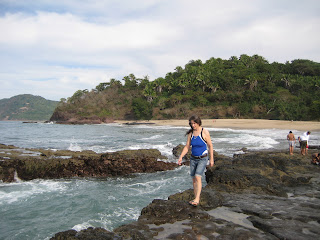 One day we wandered south, on a rutty dirt road over a ridge, and found a smaller beach around the bend from the main beach. The boys and I played football, sort of: I was Brett Favre on one of his crazier days, and the football was a lime. It was pretty much just an excuse for Colin and Jeremy to beat each other up, but now and then I drew up a sneaky play that involved taking someone's swim suit down. Deb sipped beer and took photos. Don't look at that fat man in the picture. It is just an illusion. The game ended in a tie. 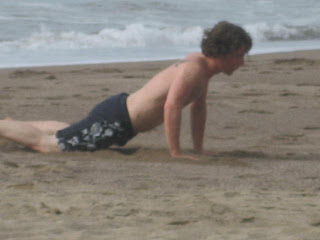 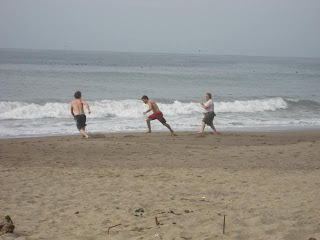 Another day we wandered out to the beach in the early afternoon, found some shade and slept half the aft away. The boys got hungry, and armed with one of my fifty peso notes went wandering away, to return shortly with a stack of fish, shrimp, and beef tacos. Hot beach, cold beer, and tacos? It is better than 72 virgins. At least, as far as I can tell. 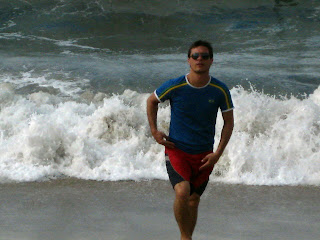 Then it was time to body surf. The water was perfect: cool and refreshing. Salt water is just really good for the body, I gotta tell ya. Deb was utterly blissed out. Long after Colin and I--the two old men--had dragged our sorry butts up to our towels and collapsed on the beach, Jeremy and Deb kept going, catching wave after wave, glorying in this throwback to her childhood. Deb spent most Augusts of her early years camping on the beach in California, before it was spoiled by people from Indiana. Well, Wisconsin too. Minnesota for sure. 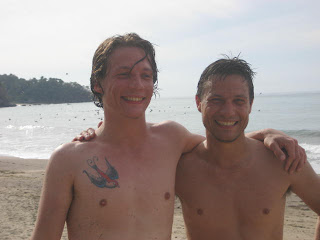 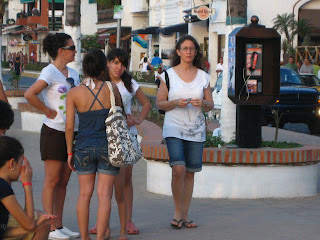 Taking a break from the cold and the snow, my wife Deb and I travelled down to the Pacific coast of Mexico for a week. Our sons Jeremy and Colin beat us there by about a week, spending a few days in Guadalajara before bussing down to Puerto Vallarta with the task of finding us a decent place to stay for a few nights during the high season of Epiphany. The Mexicans were on vacation.
The boys did a good job. One tossed the other in the ocean, wearing his cell phone. So we couldn't actually reach them. The other left his cash card back home. So they were broke when we did find them. But they did the job. We stayed at the Marlyn, a very Mexican little hotel in old, el centro PV. And they found the best Mexican food in town, ironically cooked by a gay chef named Austin, from Boston. Life can be very strange like that.
Soon enough, we'd had enough of Puerto Vallarta. It was a madhouse, and not our kind of madhouse. We were looking for something else. The boys celebrated our imminent departure by staying out all night, drinking and shooting pool. It was two very silly, sleepy boys we trundled out of town. We'd rented what was supposed to be the smallest little Dodge the Mexican Hertz handled, but got a nice SUV instead. Don't ask. 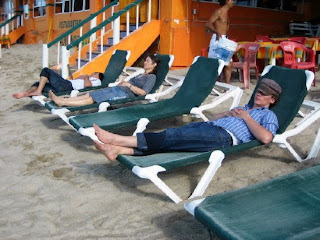 Breakfast. We drove up coast to Bucerias, which used to be, according to the Lonely Planet, one very cool place, and cheap. Breakfast at the famous Orange Building on the beach was great, but not cheap. 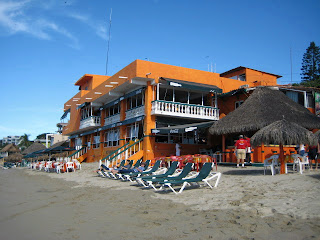 The boys continued to celebrate, but soon after breakfast hit their bellies, it was off to the beach chairs with them.

Well, we had to find a place to stay.

I had read about a nice little beach hamlet north of

Bucerias, called San Francisco, so over the mountains and up the coast we went. We found a very crowded, claustrophobic

San Francisco all right, with expensive places to stay. The tourists had found it. Drat.

There was nothing for it but to continue to drive north. The boys were still lost to the world, unaware of the growing discomfort Deb and I were feeling at not really being sure of what wewere doing. Over another mountain, down into a valley we drove. I came to another hamlet, and just decided to turn left. Right away, the vibes were better. This was a quieter, cleaner, less touristy place. Half a mile into town I came to a nice looking bungalow, called Tortuga, The Turtles. It had the most beautfiful VACANTE sign out in front! Better, it had prices that were half what we

were paying in PV! Not a word of English was spoken by the elderly manager, but he showed me a nice two room bungalow with a nice kitchen, back patio, right on the pool. Sold. The room wouldn't be ready for an hour, could we come back? Somehow the idea was conveyed. So off to the beach we went. The boys we depostied under some palms trees, took a swim and a walk, and then headed back to claim our room. And there we stayed for three comfortable, interesting, relaxing days. Aside from the nail I took in a tire, requiring the services of the local nail-in-tire-repair guy (No, really. He knew what he was doing!), it was all good. Colin became the bungalow’s residence translator, and Deb, Colin and Jeremy took part in cooking enormous Mexican breakfasts: refritas, fresh hot corn tortillas from the local tortilla factory, fresh mango and pineapple, eggs with hot peppers, and mucho hot salsa. Camp coffee, Mexican pastries, and guacamole. Feasts, my friends! Feasts. 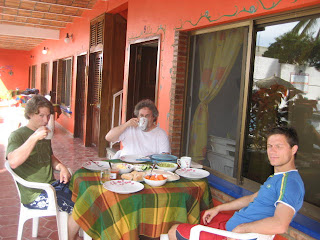