THE VIRGIN OF IZAMAL 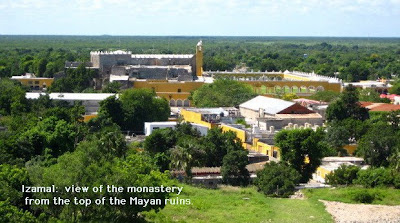 In September on a trip to the Yucutan, we visited the city of Izamal, which lies to the west on the way to Merida. It is an historic city, whose buildings tend to be painted yellow, as the monastery is in the above photo. This area has a more pronounced Hispanic influence than the largely Mayan area where we stayed, in Ek Balam. 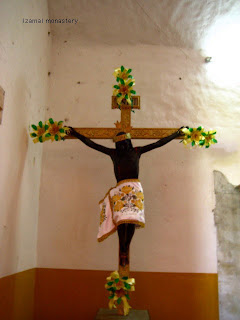 We visited on a very hot Sunday, and arrived in time for the Catholic Mass in the monastery, a service which was well attended and included a choir in the balcony with guitar accompaniment.

A beautiful crucifix greeted us, inside the enormous wooden doors at the back of the sanctuary. So. Christ can be found in this place. 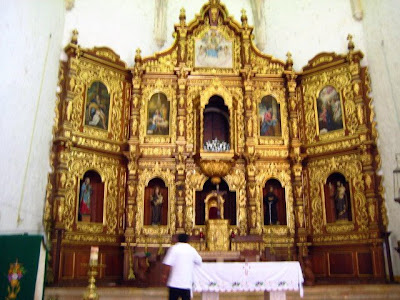 This is the front of the sanctuary. Note the little alcoves for a variety of saints and popes. Note the large empty alcove at top, center.
At the beginning of the divine service, bells rang, and two doors at the back of the empty alcove opened. Ceremoniously, regally, the queen of heaven--Theotokos, theVirgin Mary --slowly processed forward through the doors and to the front of the alcove. It left little doubt as to Who we were worshipping that morning. 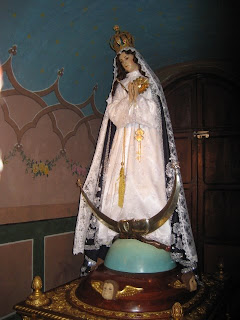 Here is the crowned queen Herself, the crown having actually been put on her head by a recent Pope.

At the end of the service, bells again rang, and the Virgin then slowly recessed back out of the alcove, past the doors, which then mechanically shut. We learned later that, mechanically, the statue of the Virgin would rotate 180 degrees, and face a smaller chapel at the back and above the main sanctuary, where the devoted could go to get more serious Virgin facetime


Here is the smaller chapel, which has wonderful paintings of the life of Christ surrounding the large alcove where Mary spends Her downtime. 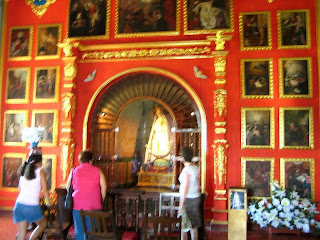 Creepy. I'm sorry, but it IS creepy!

Yes, that it is. I actually thought it was just campy. I mean, a mechanical processional and recessional featuring the Virgin?

But she's big in the Yucutan. I won't say she's bigger than the Messiah, but Jesus is seldom alone. His mater is right there by His side in all places. I'd like to think it is better than, say, animism.