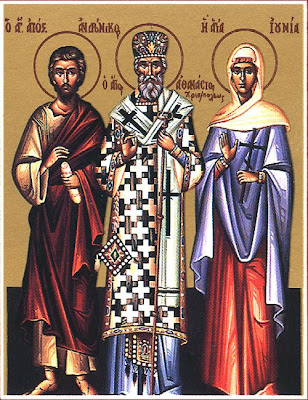 Also in Touchstone this month, a review by John Hunwicke of another book purporting to prove that the Junia of Romans 16:7 was The First Female Apostle.

"Greet Andronicus and Junias, my kinsmen and my fellow prisoners, who are outstanding among the apostles, who also were in Christ before me."
Romans 16:7

This is a fun read even if, like me, you don't read koine Greek. A snippet:

"...Our culture is one in which any new theory, fantasy, or piece of potential evidence that appears to cast doubt on the authenticity of traditional Christianity is welcomed and is sold on to the secular media within hours; anything that might run the risk of bolstering it is buried. Now there's a real conspiracy."

This quote comes on the heels of several examples, as you might expect, of solid but contradictory evidence against the Academy's modern take on the canon.

Look, I don't know if Hunwicke is right. I'm just a guy in the pew, trying to find which page the Psalm-of-the-day is on. I couldn't fight my way out of a philological paper bag. It would probably take several back-and-forths between the author and the author he's arguing against before any real conclusions could be drawn.