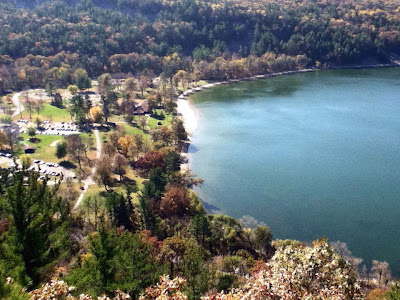 I accompanied the Verona High School Science Club to Ski Hi Orchard and a hike at Devil's Lake on Saturday, giving them a quick tour of the orchard (including hands on apple picking which is always a big thrill no matter what the age). Here's a view of the south end of Devil's Lake from atop the bluffs, just above Balance Rock.
Anke the German Shepherd came along, awash in glorious affectionate petting from everyone she met. And to end a nice climb up and down the bluff with a nice wade in the largest drinking pond she'd ever seen! Glory. She slept all the way home.
Posted by Bruce Gee at 6:30 PM 2 comments: 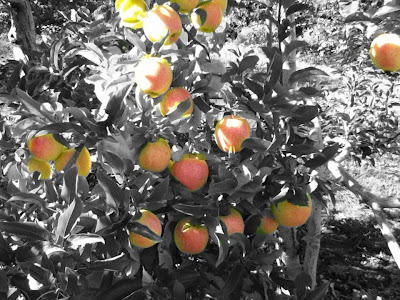 Early October means a quick trip to the Baraboo Hills, to Ski Hi Orchard for our annual picking frenzy. Having worked here years before and having a friend in the owner, Betty Thiessen, I get to go out into the orchard and browse around, picking my own. Ribs and Deb along, we trounced down the old gravel road in search of apples!
Our first stop was in the Golden Delicious aisle, where we loaded up in preparation for the Annual Applesauce Day, a tradition in the fam. Um. A tradition for Dad that is, although I do manage to talk my spouse into helping out. The kids duck out and await the results. Golden Delicious applesauce needs no sweetener, and we make about 30 quarts a year, to freeze and bring out for the eating throughout the long winter.
Next, we moseyed down past the Cortlands and Jonathans and hit up the Honey Crisps, a hybrid the likes of which we didn't know back in the Day, when old Art Bassett roamed the orchard in his War Two vintage jeep, keeping an eagle-- and I mean eagle--eye on those who were privileged to pick his apples for him. That was sort of the arrangement. Honey Crisps are, whoa, sweet and crunchy! Some apple researcher hit paydirt with this apple. Two bushels' worth.
George, the orchard foreman, a grizzled old veteran of Who Knows What--but grizzled nonetheless--came rambling down in the same old Massey Ferguson on which I used to roam the orchard. "I remember you from last year! Thought you were just pickin' Goldens."
"Yeah, we mosey around a bit, pick a few other things as well."
George didn't shoot us, having been warned off by Betty. Last year was a closer call, since Betty forgot to tell him we'd be invading his orchard. You don't get anything past ole George.
George and I chatted about the crop. "Yeah, we gotta color pick those Crisps. Damn things keep fallin' on the ground. Next year I'm just gonna pick 'em clean once!"
Color picking means just that: pick over the best looking apples and leave the rest to redden and ripen a bit more. It isn't a practice pickers enjoy, because it slows the picking, and if you're being paid piecework, that slows the income.
It appears to have been a nice crop of apples. George's parting shot was to tell me that if I wanted to pick apples, to pick Cortlands. "We ain't pickin' any more of 'em. I got a cooler full. You can have as many as you want!"
I'm coming back up in a few weeks with a local high school science club. Every two years I give them a tour of the orchard and the old log cabin homestead. This year I think we'll venture into the orchard, and if those Cortlands haven't frozen, by golly I think we'll send the science club kids home with some pie-making apples.
On the way back up we topped up our bushel boxes with some Jonathans and Red Delicious, as well as the Cortlands with which to make pie filling. I picked a mixed bushel for Ted Gullixson, a local Lutheran pastor, and on the way home we dropped them on his doorstep. We hope he finds them!