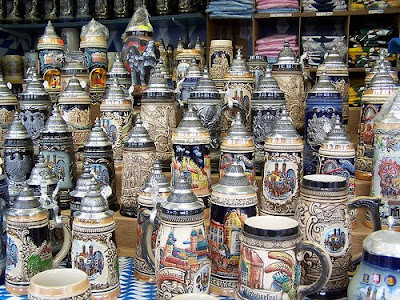 Bavarian monks brewed strong bach beers to sustain them during Lent?
That sounds like cheating to me. But then, Cesar Chavez ate Kosher crackers and downed RC Cola during his protest fasts, so I guess a little cheating when it comes to long-term fasts is perhaps traditional.

The New York Times (HT to Get Religion) has an article about the 27th Great American Beer Festival here. It talks about how often beer and religion have been intertwined.

Any good German-American Lutheran (I am, I guess, an ingraft) knows this in his bones. We use beer to sustain us through good times and bad; through fasting, gluttony, liturgy, and long, winter bowling leagues.

I'm wondering if this brewer however, perhaps because he is not religious, has crossed a line:

Does it have chunks in it?

Yeah, no doubt. You drink it the way hump-backed whales eat: just filter it through your baleen.