I Want Me One Of These 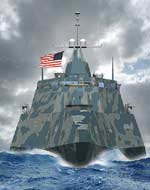 It sounds like a Millennium Falcon, except for water. Cool.

Um, as a lawn decoration for your front yard? To sail around in circles on Lake Mendota?

Yeah, these should change Naval warfare significantly, as aircraft carriers did. Hopefully our Navy gets a little more competent, though. Subs colliding with support ships, cruisers grounding on reefs... this is ridiculous.

It could be the waterborn equivalent of the Hummer. Cadillac will market the civilian version. Think of the possibilities. 20,000 Leagues On The Surface Of The Sea!
Fully armed, what fun we could have.


As for Nathaniel: do I hear the attitude of an Army dude rumbling in the background, or is that just my old cynical self listening?