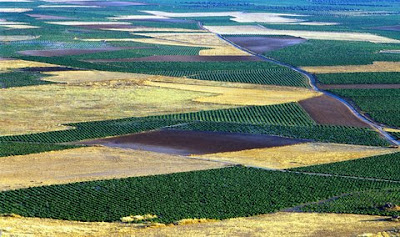 According to an article on Bloomberg, the world lost 50 Trillion Dollars in value in 2008. This is equivalent to A YEAR of world gross domestic product.

I keep thinking that there is a kind of Jubilee going on, not as part of a covenant with Yahweh, but maybe amounting to something like the same thing.

Or, one could say that this is what happens to the world's inhabitants when trust in the Lord is neglected and a Jubilee Year is not observed. Let's review:

The Year of Jubilee is treated in Leviticus chapter 25, which encompasses a speech from The Lord regarding the establishment of three institutions in the lives of the Israelites, for when they settled in Canaan. The three institutions are 1)the Sabbatical Year, 2)the Jubilee and 3)the redemption of the land with its tenants. (I'm getting this from Dr. Kleinig's commentary on Leviticus, a most valuable volume of work).

The Sabbath Year was every seventh, and the Jubilee was the fiftieth year. In return for resting the land every seventh year (Talk about incarnational theology and the connection between the redemption of Humankind and Creation!), the Lord promised that the Israelites would have more than enough to live on. Frankly, what's NOT to like about taking every seventh year off?

The Jubilee was established in relationship to debt and a farmer's losing of his land in order to pay debt. It was a corrective for sin, of course. Someone buying the debt of the farmer had the use of the land for a limited time. The word "usufructuary" shows up in these discussions, but I'll let the gentle reader off easily and just say the buyer became the steward of the land, entitled to its use until the Jubilee, when it was returned to its original owner. The value of the land was established in part by the numbers of years before the Jubilee. The longer the time, the higher the value. Of course, some other market considerations had to come into play as well. The price depended upon the fecundity of the land.

Note that this whole thing worked to the extent that the people were faithful to Yahweh, and trusted Him for their provisions. There was a rhythm to this life of promise, just as there is a rhythm to our economic lives. The second rhythm is not as promising as the first. But there may be parallels.

If we do not observe the Sabbath days and years, and the Jubilee, isn't it likely that the Lord would visit a Jubilee upon us nevertheless? In the Jubilee year, "from the field you may eat its produce". In our secular jubilee, we're left to eat what we can find of what is left from the fat years.

Kleinig in his commentary offers a remarkable section at the end of each chapter entitled FULFILLMENT IN CHRIST. For him to include this is especially useful since the particular book of Leviticus is so abused as irrelevant to modern day peoples. Kleinig on Christ and the Jubilee:

"In Is 61:1-3 we have a remarkable prophecy. There, in words that recall Is 35, the Suffering Servant of the Lord declares that he was sent by God to proclaim an extraordinary Jubilee. In the regular years of Jubilee, creditors released debtors from their debts and returned their land to them and their families. But in this year of Jubilee, God himself would free his people from their debt to him and avenge their enemies. Through his Messiah he would announce a royal amnesty, a year of divine favor that inaugurated his reign as King. He would free his people from oppression, enslavement, and imprisonment. He would comfort the bereft citizens of Zion by rebuilding their ruined city and reinstating them as a liturgical community...Thus the celebration of the Jubilee was taken as a type for the messianic age...
Luke's gospel shows us that Jesus explained his ministryin the light of the prophecy in Is 61...[A]fter Jesus had been baptized, he returned to Nazareth and declared that he was ushering in the ultimate Jubilee. Jesus deliberately selected Is 61:1-2, with its allusion to Lev 25:10, as part of his Scripture reading in the synagogue for his inaugural sermon at the start of his public ministry..."

Is the disappearance of fifty trillion dollars in "worth" a parallel to the OT Jubilee? It doesn't matter who did this or "why" it happened. It is impossible for faithful Christians to ignore the hand ("hands") of God in this. In it, we can see the two hands of God: His judgment (on one hand) and His mercy, working together to edify and discipline the world. Much good will come of it, both by humbling us and by subsequently blessing us.
Posted by Bruce Gee at 11:33 AM

Yes, yes! Right there is a framework for understanding what God may be doing now by giving us gross socialism. We need judgment, discipline, and humbling. I hope we don't need it as badly as imperial Russia did at the start of the 20th Century. Either way, we can be sure that His blessings will follow, and that's a comfort.