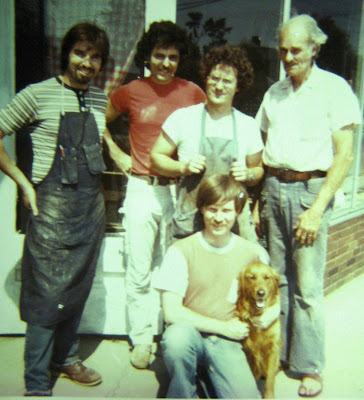 Me, my dad, and some of the boys in front of Country Antiques
Oh, and Peaches.

On the occasion of our 31st wedding anniversary, Deb and Robin and I drove up into our old neighborhood on Madison's east side for dinner.

My father and I had run Country Antiques, a refinishing and furniture making shop on Atwood Avenue, for seven years in the late seventies and early eighties. After Deb and I were married in 1978, after a few other stops we bought a very sweet little two story house around the corner from the shop, on Division. Deb was working as a young R.N., and soon enough little houly-mouly, Colin, was born into the world.

Atwood Avenue was at that time trying to figure out what it was going to be. It had grown up as a pure blue-collar neighborhood. In post-war Madison, the main east side employers were Oscar Mayer foods, Gisholt machine factory, and Rayovac. All of them--along with a cluster of smaller industrial shops--were centered on the east side. As these industries matured and eventually died (Oscar Mayer is still there, but much less robustly than back in the day), the neighborhood slowly aged and eventually began to get regentrified as university graduates unwilling to leave the city discovered the cheap real estate and settled in droves. Instead of blue collar guys, the area gradually filled with lawyers, state office workers, and medical professionals in their first homes.

Across the street is the Blue Plate Diner, a wonderful little American style restaurant that used to be the Havey Brothers service station. Dick and Dave Havey had been there since the war, buying the station from their uncle. They did all of the work on our old Ford step delivery van, including once filling it with gas after I had it towed in because it wouldn't start. The very dour Havey brothers thought that was pretty funny. I remember hanging out with them one day when Ken pulled up in front in a new used car. "Hey look," said Dave Havey. "Ken got a new car!" Dick said, "That's because his old one finally filled up with junk!'

After dinner we crossed Corscot and peeked in the windows of my old shop. The guy who bought it was also named Bruce. At the time he bought it there was a refinishing shop next to ours named Bruce's. There was a certain amount of confusion among our collective customers just what was what. The Bruce next door was a grumpy old guy who I think would have preferred to be doing something else. He had been there before Country Antiques had gotten its start, and was always a bit put out by that. After I'd worked at CA for a few years, a hand-printed sign showed up in Bruce's window, saying,

The sign stayed up a few days. One of us strolled over there at one point and said, "Say, Bruce. Are you SURE you want to have that sign up? We're not sure it is going to do much for your business, is all." Soon enough, I think Bruce figured that out for himself.

Some time later, our two golden retrievers began their long, illustrious careers as Wood Chewers and Shop Greeters. Peaches and Jasper would hang at the door of the shop. Many a time a potential client would park in front of Country Antiques and Bruce's Fine Furniture Refinishing, get out with a broken chair in his hands, and then stand looking back and forth at our two shops, clearly undecided into which shop he should go. Out would wiggle these two golden retrievers, and inevitably the customer would be lured into our shop by the two dogs.

The wood chewing part of it was amazing. Old Peaches got it started, snagging worn sand paper and old wood bits as they fell off one of the benches, and reducing them to gristle. She would park herself under the bench and wait for wooden manna to descend. But she never chewed up anything of any value, and that was the amazing part. Peaches was also famous for the "golden retriever lean", so called because of her amazing ability to ride up front in the step van, both doors wide open, and fearlessly "lean" into curves as one of us furiously took a corner. Peaches started out belonging to my sister Rebecca, came into the possession of my Dad, briefly sojourned with Deb and me, and eventually met her end with my Dad, being overdosed on Vita Lea supplements. 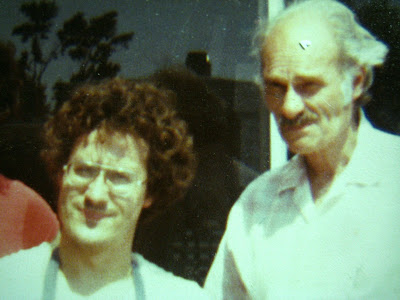 We never did make any money at Country Antiques. We hung on by our fingernails, slogging through that awful Jimmy Carter economy brought on by the awful Dick Nixon economy, just taking it a few days at a time. By 1984, when I was ready to strike out on my own and my Dad retired and sold the business, I was making a whopping eleven grand a year. I remember my Dad was famous for the five cent raise. "I put a little something extra in your paycheck this week!" he'd say in all sincerity. Uh, thanks, dad. Thanks!

Bruce's eventually became Joe Shulla's rolltop desk shop, and the quality of the neighborhood went up substantially. I peeked in Joe's old shop as we passed by tonight. It is now a restaurant.
Posted by Bruce Gee at 8:38 PM

I may have lost my mind but I haven't lost the hair. It has just changed color, is all.

Thanks for sharing, Bruce!