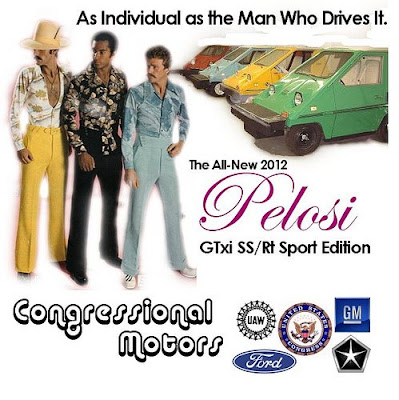 IowaHawk puts a hilarious spin on Congress' notion that they can get involved in saving the American car industry. Read it, weep.

All new for 2012, the Pelosi GTxi SS/Rt Sport Edition is the mandatory American car so advanced it took $100 billion and an entire Congress to design it. We started with same reliable 7-way hybrid ethanol-biodeisel-electric-clean coal-wind-solar-pedal power plant behind the base model Pelosi, but packed it with extra oomph and the sassy styling pizazz that tells the world that 1974 Detroit is back again -- with a vengeance.

One thing is sure since the election: politics are funny again. Laughing is about all we've got left. Or... or all we've gotten right. Heheheh.
Posted by Bruce Gee at 10:30 AM