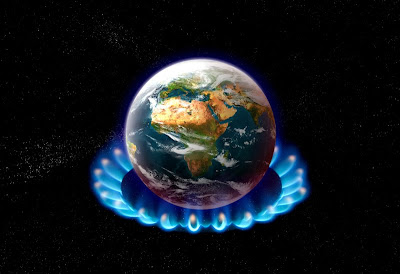 Ground surface temps have been measured all over the world for decades and then collected in order for us to know whether the earth's temperature is actually rising, falling, or staying more or less the same. But there appears to be a great deal of chaos in this scientific undertaking. A commenter named Phil over at Watts Up With That? helps explain the state of affairs at NASA's Goddard Institute for Space Studies and elsewhere:

Think of it this way. You conduct an experiment. After you conduct the experiment, you find out that (a) some of your instruments were either miscalibrated, defective or improperly located, (b) external factors that you did not take into consideration or measure at the time the experiment was running have affected your measurements, (c) some of the measurements during the experiment were not recorded, (d) you used different instruments to record measurements over different time periods at different locations during the experiment. You find all of this out AFTER you have been running the experiment for many years. Then, instead of throwing out the data as hopelessly compromised and starting the experiment over with these factors corrected, you (a) do a study estimating how miscalibrated, how defective and how improperly located your instruments were and apply adjustments to all past data to “correct” the improper reading, (b) you do a study to estimate the effect of the external factors at the time you discover the problem and apply adjustments to all past data to “correct” the effects of the external factors even though you have no idea what the effect of the external factor actually was for a given instrument at the time the data was recorded, because you only measured the effect years later and then at only some locations, (c) you “fill in” any missing data using data from other instruments and/or from other measurements by the same instrument, (d) you do another study to determine how best to deal with measurements from different instruments over different time periods and at different locations and apply adjustments to all past data to “correct” for differences between readings from different instruments over different time periods at different locations. Then you continue running the experiment, while you continue applying all of your adjustments on an ongoing basis to all past data as new measurements are recorded. Finally, you believe that all of your data has been meticulously recorded with great accuracy and any uncertainties are minimal. Then you proceed to use the results of your experiment to justify changing policies for the entire world at a cost of many trillions of dollars, with the unerring belief that your experimental data is completely reliable.

It isn't helpful that one of the organizations being relied upon for basic data on temperature change is led by a proponent of man-made climate change. Fix the science by fixing the organization that does the science, fund it properly, and let's find out what we know before we decide what we do. Is fixing a problem that may not exist something that ought to be high on our list of priorities?

Anyway, you may want to keep an eye on the blog listed above as well as this one:
http://www.climateaudit.org/ There is some mild sniping going on betwixt and between the competing agonistes, which makes it all the more a spectacle to behold.