THE LION IN WINTER in October 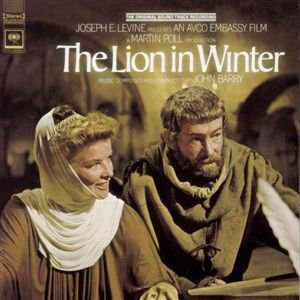 The despotic leader of the No Inklings Book Club--me--has declared our next meeting Movie Night. If the little lambs aren't going to read what I assign, then a pox on them. Let them eat cake, and watch a flick.

Being despotic, I decided what movie we'd watch, but I watched closely to ensure it met with the lambs' satisfaction. I had Robin in my pocket, as she'd seen and approved of my choice in advance. Machiavellian, am I.

Peter O'Toole and Katherine Hepburn, unhinged and freed to chew the scenery to their hearts' content, star in this old classic, a movie with perhaps more great one-liners than any I know of. To say this is a movie about man's sin--his abject, total, unremitting sin--is an easy point to make. To say it is also about grace is harder, and the challenge the No Inklings will have.

I'm also conducting a contest: the person who most quickly identifies a buried line of dialogue will win Some Sort of Prize. Stay tuned.

But now, some zingers from THE LION IN WINTER.

Eleanor: I adored you. I still do.
Henry II: Of all the lies you've told, that is the most terrible.
Eleanor: I know. That's why I've saved it up until now.

*****
Eleanor: I even made poor Louis take me on Crusade. How's that for blasphemy. I dressed my maids as Amazons and rode bare-breasted halfway to Damascus. Louis had a seizure and I damn near died of windburn... but the troops were dazzled.

*****
Henry II: I marvel at you after all these years. Still like a democratic drawbridge: going down for everybody.
Eleanor: At my age there's not much traffic anymore.

[Gazing into a mirror]
Eleanor: My, what a lovely girl. How could her king have left her?

Eleanor: In a world where carpenters get resurrected, everything is possible.

Eleanor: I suppose every family has its ups and downs...