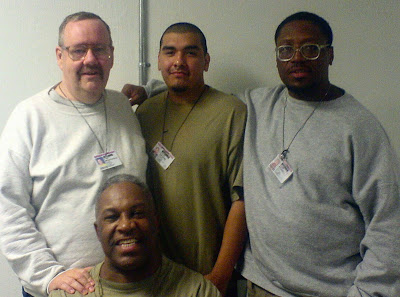 Mike, upper left, with some of the Bible study brothers

I have mentioned before that I lead a Friday night Bible study at the local prison near Oregon, WI. One characteristic of these studies is how quickly I come to be attached to these guys. Another characteristic is that they can be gone before I know it. I miss a Friday night for one reason or another, and when I go back, a couple of guys have been transferred or released. I normally never hear from them again.

A month or so ago on a Friday night, I learned that Mike McNichols, who had been a faithful attendee at the Bible study for six or eight months and had been expecting to go into a quick release program in a few weeks, had been transferred back to the higher security prison because he'd been diagnosed with cancer and needed their more sophisticated medical facilities. I got his address and sent him a short note, expressing both sorrow and encouragement to him at this "setback". Life in Christ doesn't ever really have setbacks, but stil the flesh suffers on that long road to victory. So it is with Mike.

He sent me a copy of a letter he was using to communicate to his many family and friends. Without his permission, but with confidence that he would approve, I'm including parts of it here.

I remember Mike for his sense of humor and his intense, almost ambitious love of ideas. When I was going to take a photo (above) of some of the Bible study guys, I said, "Ok, line up against the wall." You know. For the photo. Mike quickly laughed and said, "You shouldn't say that to us. We're criminals!" And some time later, while we were sitting waiting for the others to join us at the beginning of a Friday night, he said to me, "I stole 1.6 million dollars. I'm not getting out of here for five years at least."

In Mike McNichols own words, then: his story.

"All things work together for the good of those who love God and are called according to His purpose." Romans 8:28.

The month of June 2008 can be viewed as one of promising news or devastating news. It seems to depend on your perspective of life.
On June 5, I had just returned to Oregon Correctional Center (OCC) after spending large parts of the three previous days at University of Wisconsin Hospitals for tests to see why my red blood count was dangerously low and hopefully learn why I had been suffering from debilitating back pain during April and May.

I heard the knock on my door and found Rita, one of the nurses at OCC, standing there with a guard. "Mr. McNichols, they want you back at the hospital immediately. I can't say exactly what it is, but it is serious."
I had spent most of June 4 in the Hematology/Cancer ward at UW Hospitals. The main things happening that day were a bone marrow biopsy and two blood transfusions. Leaving the ward, reading the sign, I thought: "I just spent the day on a cancer ward. This can't be good."
When I was told I was returning to the hospital, I called my sisters, Julie and Connie, to let them know. I remember saying to Connie, "I don't want to die."

I was admitted to the secure unit at UW Hospitals and remember a doctor walking in. He said, "Mr. McNichols, you have Multiple Myeloma." He explained it was bone marrow cancer with no cure. "I have cancer," I thought. Then something happened that changed my life. All I could think of was Romans 8:28 (see top of letter). Well, I love God. I asked to be and am called "according to his purpose". God plans to use this to further His kingdom and he's chosen me to stand up and stand out for Him.
The doctor continued to tell me about MM. I listened, but just kept hearing Romans 8:28 and the words to the hymn How Great Thou Art. When he finished, he asked if I had questions. "Yes. What shall we do about this and when do we get started?" The next five days I underwent various forms of oral chemotherapy, had skeletal xrays, and 4 of 10 radiation treatments. Yes, I cried as I pondered my mortality (I had plans to live to 85), but I was continually reminded that God has chosen me, in this time and place, to work His good.

As most of you know, I was sentenced to 7 years in the Wisconsin prison system for stealing money to support my gambling and alcohol addictions. I had learned in May '08 that I was accepted into Earned Release, a 6 month program that grants release early to those completing the sessions. I wold get out of prison 3 years, 10 months ahead of schedule. I was looking forward to release, but my back hurt so severely, I didn't enjoy the prospect.

So how did I get to this point? I went to prison January 20, 2006. Three months later, in early April, I found myself on my bunk talking to God. "Okay Lord, I have no money. I owe so much I'll never be able to pay it back. I lost my business, my wife left me after 31 years of marriage, our house went to foreclosure, I have no career. My kids are struggling with my very existence. I have nothing to offer you, except me. Just me. If you want me, I'm yours."

It was a "reconversion". I've known God since my friend Ken showed Him to me in 1964, but He didn't mean that much. I did my own thing. I came to believe that the verse "your sin will find you out" didn't apply to me.
God let me go my own way for about 13 years. I faked my Christianity and did unhealthy and immoral things. Yet God never let me out of the palm of His hand. From April 8, 2005 to May 4, 2005 I lost everything. I got an OWI, my wife left, I was kicked out of my house, I was sued, lost my business and finally was arrested. For 9 months I was homeless. I slept on a sofa and got a job as a painter for minimum wage. September '05 I had to have a disc removed from my back and lived with my sister and mother for the final 4 months before sentencing.

Four months after coming to prison, my mother died. I couldn't attend the funeral. While here God allowed me to give something back. I tutored other inmates. Many got their HS equivalency in the process. Finally in September 2007, I left New Lisbon to go to the Oregon Correctional Center to await my entry into Earned Release and early exit.

Last November I found myself at 256 lbs. In January I found I had diabetes and now had a reason to lose weight. But my hemocrit/hemoglobin red blood counts kept dropping. They should have been 13-17 range; mine starts at 11.8 and by June it was under 8.0. Tests revealed that I don't make red blood cells. I make too many white ones--which became tumors. The CT scan showed a tumor "about the size of a baseball" in my sacrum (tailbone) intruding into the spinal canal. There was a second on in my spine at T12 that collapsed a vertebrae.

A common question asked with cancer is "how long?" Another: "Can we cure it?" I have been given no time frame to live. This cancer cannot be cured. In other words, I have terminal cancer...."All things work together..."

It is treatable. The ultimate treatment is stem cell transplant. I am a candidate; possibly by the end of the year. I see the oncology docs once a month. I've had 4 blood transfusions, 2 IV chemo treatments, and I take 16 pills a day to fight this thing. I walk long distances here, 2 blocks or more, with the aid of a wheelchair and continue to believe "All things work together for the good..." My cousin sends my "healthy thoughts", my sisters take good care of me; a church in Louisville prays for me.
After diagnosis, the Earned Release opportunity was taken from me because I cannot have "health needs" while in the program. It was though, given back, as one place offering it does have medical facilities on site. I am on a waiting list.

My sister Julie asked me if I was "scared" of dying. No I am not. People have inquired about how I feel--really feel. I know God worked this through. I was diagnosed with diabetes in January and as a result had follow up blood tests. My dropping red count was found because of the follow up blood tests. The nurses at OCC where I was at the time, Patty, Rita and Kathryn stayed on it and that led to my diagnosis. They probably saved my lie. To them I am eternally grateful..."

Thank you for sharing this. I will keep your guys in my prayers.