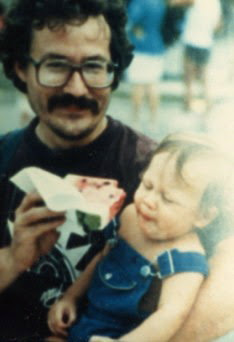 Or is it? You make the call.
This is Colin, 26 plus years ago, on one of those Fall weekends when Deb was off in Milwaukee finishing her nursing degree, and the kid and I would take off on various adventures. This pic was taken at the World Watermelon Festival, in Pardeeville, WI. No, I'm not force-feeding the Houli-Mouli. I'd give him a bite; he'd gobble and gag, and then I'd give him another bite.
This was, of course, the festival where I was a member of the Four Man World Championship Seed Spitting Team. We were all pathetic, but we had one guy who could really get some mileage out of a seed. The secret was picking the right seed. You knew that. I honestly have no recollection of where Colin was while I was competing. He may have been competing in the speed eating contest.
What a cute baby. Where'd I get those glasses?
Posted by Bruce Gee at 9:52 PM

I think I saw this picture on Facebook a while ago. Nope, not child abuse at all. Just a dad who is clearly in love with his baby son. Very cute.

Did your son, Colin, offer his thanks for the compliment? Of course it is a pat on your back as well but nonetheless...one hopes he grew up a 'thankful' childe.