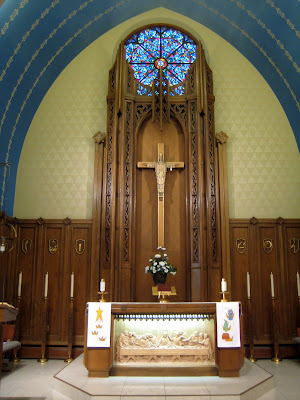 Trinity Lutheran Church, Sheboygan, WI
Ah, Sheboygan. Brats and Lutherans, and the question is: are they interchangeable?
Haha, just kidding. My daughter and I, along with the interminably zesty Zeke Bartlett of Mental Llama blog fame, spent the weekend at a theological retreat sponsored by the Higher Things Lutheran youth organization. This isn't your ordinary happy-clappy Christian youth get together. The topics are decidedly doctrinal and challenging, and the kids,--generally confirmed youth through high school-- carefully listen. The pastors who lead these sessions are engaging and entertaining, but they definitely don't hold back when it comes to going deeply into the chosen topic of the retreat.
The location of the retreat was Trinity Lutheran (one of them, anyway) in Sheboygan,with its beautiful, restored sanctuary. The people of Trinity are to be congratulated for taking such good care of this church they have inherited. Pastors Mech and Berg can be my pastors, any day. 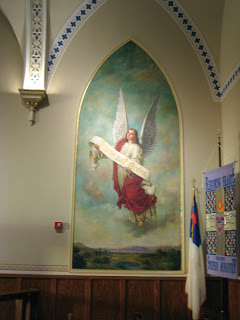 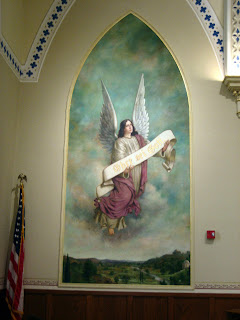 The chosen topic of the retreat was itself a deep one: the doctrine of Confession and Absolution. Try luring 175 teenagers to something like this. Yeah, just try it!
Yet come they did, and the topic was fascinating. While there was ample time for the kids to hang out together--as well as to watch a Hitchcock movie and to see Comedy Sportz at a nearby restored movie house--the bulk of the time was taken up with worship, breakout sessions on various topics, and longer plenary sessions with two pastors. The highlight of the plenary sessions was a great video of Johnny Cash, late in his life, singing an old Nine Inch Nails tune, HURT. It is worth a look, and was a great setup for the topic of the need for confession, the greater need for absolution--and while we're at it for a nice chat about the lost but returning practice of Private Confession and Absolution.
I found myself often sitting at the back of the auditorium, just looking around at these kids. Yes, there was chatting and joking around, but by and large they listened carefully to what the presenters were saying. It helped a lot that the presenters were both interesting, funny, , and also interspersed really great videos into their talks.
Scattered around the auditorium and hallways were quotes from the good Doctor Luther himself, some of them pretty funny; some of them more funny because of where they were placed. And of course, the main speakers were called upon to judge the chocolate chip cookie bakeoff. It sounds like a good gig, but they were pretty sick of cookies by the time the judging ended. 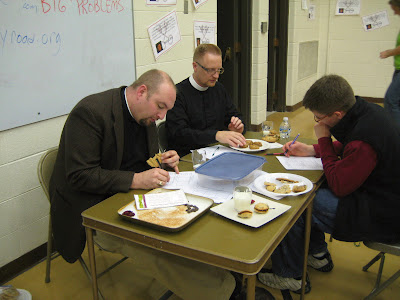 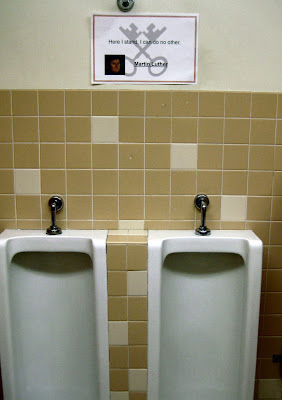 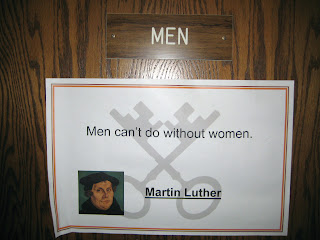 Bruce... it is all coming together now. I've read your blog for some time now. I'm the seminary student you sat with at the Divine Service on Sunday.

It was good to meet you and glad you got to bring some kids to the retreat.

Members of the congregation laid all that marble tile in the sanctuary themselves.

It's really a beautiful sanctuary, now with decent acoustics because all the horrible carpeting is gone.

And the blue ceiling in the chancel is just divine.

Hey, Sam! Glad you made the connection.

Hey Christy! Maybe I'll post some more of them.

Hey E's C! Getting carpet out of sanctuaries is very high on my priority list. The blue in the chancel really sets off the panelling and altar. Are you from there, or have you been to a HT event there, or something else?

The congregation was a supporter of my missionary family when I was a kid. My Dh grew up in that area; his dad was pastor at one of the other area churches (which was also a supporting congregation of my parent's missionary work), and one of the current pastors was a college friend of my husband's.

When we visit there when we're up that way to visit family, it's weird because people we don't really know recognize either our faces or our family names.

That Johnny Cash video is one of my favorite music videos of all time!!! (Not that that's saying a lot... but I really love that video.) So jealous of the kids getting to experience a movie house.

Sounds like a great time; glad you got to go. Sorry you had to endure Zeke.

The conference sounds great. Ic an't wait to start getting involved with those sorts of things again.

Oh, Sheboygan. What a lovely city, no? Comfortably sized, beautifully located. It's funny how much you can come to miss a place you were WAY too cool for as a teenager.