A Jew From Warsaw 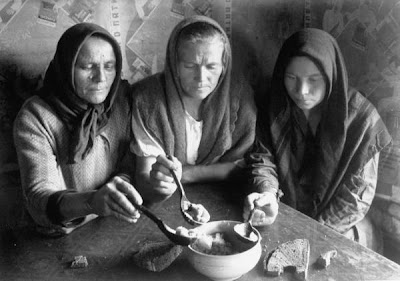 There are a number of movies around telling some of the stories about the suffering Jews underwent during War II in Europe. The Pianist, Defiance, and others--not to mention the great novels of Allen Furst--do a great service to the history and memory of that terrible war and its victims.

I was working today in the [retirement community] apartment of an elderly lady, restoring a few pieces of transit-damaged furniture and trying to figure out what went wrong with the sliding mechanism of an expensive Italian table she had purchased in Chicago.

"So, you're from Chicago, then?"
"Well, actually, I was born in Russia," the petite, dark-haired lady, whose name is Dvorah, said. I did the math, and figured out she had a story to tell. * She also looked more than willing to tell it, if I should be willing to take the time. I sat down, and off she went.

Her family was Polish, from Warsaw. Her grandfather--I pointed to a portrait on her wall; she nodded--was a cantor in a Jewish synagogue in Warsaw. By 1939, he had seen enough of what Hitler was doing to his people--and as a well-known religious leader in his community he knew he would be among the first to be singled out--that he decided it was time to flee. So in September of 1939, with the Germans already invading Poland, he took his wife and his daughter and her fiance, and escaped eastward across the border into Russia. By December 1939 Dvorah's parents had been married, and immediately afterward were taken as prisoners to Siberian work camps. They worked in the camps until 1942, when the gates of the prison were opened and they were told just to leave. Go! And Dvorah was born to destitute, weary, nearly-broken parents who were on the run.

But run where? At this point I started thinking about the movie DEFIANCE, which tells the heroic tale of a couple of Czech Jewish farmers, caught in the same circumstances in the same war. And then Dvorah began to tell me, in her own words, her own Defiance story. Her parents made their way to the mountains of Kazakhstan, because there was no other place that was safe, and because they had been told by other Jews that there were groups hidden out there. Dvorah's parents stayed there until the end of the war, Dvorah attending schools that were spontaneously organized in one camp and then another.

Well, they couldn't stay there. She told me she and her parents were smuggled out of Warsaw--by cart, train, boat--until they finally reached a refugee camp in occupied Germany. They pretended, dark haired and dark-eyed, that they were Greek gypsies, and Dvorah was allowed only to speak Hebrew, not Polish. Their escape was enabled by another phenomenon I hadn't known about: after the war Israeli commandos had dispersed throughout Europe, helping groups of their fellow Jews to safe havens. That is in itself a story that needs telling. Dvorah and her parents remained in the refugee camp from 1946 to 1949. Finally, an uncle arranged for them to come to Chicago and make their life there.

So, yes. She's from Chicago. 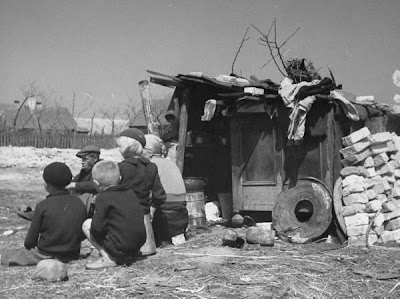 * I have found that elderly ladies in particular almost always have great, well-oiled, embellished-in-the-telling, vivid stories to tell. If only someone will sit down and listen.
Posted by Bruce Gee at 8:42 PM

My FIL is also a WWII refugee. His father was conscripted by the Germans to serve as a translator on the Russian front, since he spoke both German and Russian.

He was an insurance agent, not a soldier; he was killed in 1941, leaving his wife with an 18 month old son. My FIL and his widowed mother spent the rest of the war and the first few years after the war in bombed out basements and Red Cross camps.

"Exodus" by Leon Uris covers the post-war development of Israel. Good reading. Also by the same author, "Mila 18" is a fictionalized account of the Warsaw Ghetto uprising.

Wow. Now there's a story. I love listening to older people talk; if you can get them going, they almost always have something to say worth hearing.

Thank you for sharing her story. She sounds like someone I would love to spend time with.